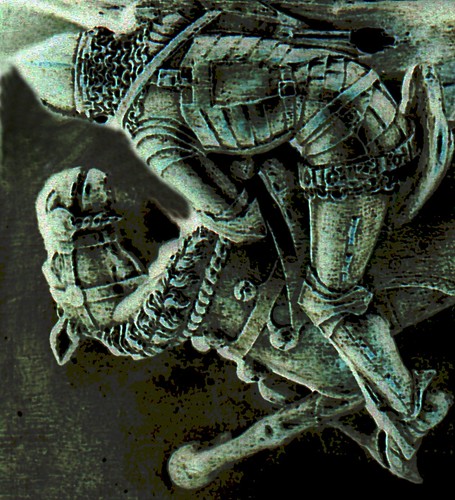 Image by Giles Watson’s poetry and prose
The story so far: At the close of the hunting season, King Arthur’s retinue descend from the fells and prepare to herd the barren does into the hollows in order to slaughter them with bows and arrows. Sir Gawaine leads King Arthur’s wife Gaynore down the track, when suddenly the woods are cast into darkness, and they are separated from their companions. Whilst Gawaine endeavours to explain away the phenomenon as a solar eclipse, a decayed, animated corpse appears before them. Gawaine observes that it is crawling with snakes and toads, and draws his sword to defend his queen. The ghost tells Gawaine that it is all that remains of Gaynore’s mother, and that it once was more beautiful even than its daughter, but is now a rotting corpse. It commands him to bring Gaynore into its presence, and when he obeys, it tells her that it is in Purgatory, and can only be redeemed by her prayers. Gaynore asks whether there is any hope for her mother’s soul, and after giving a prescription for its own salvation, the ghost turns on Gaynore, accusing her of pride, and insisting that she too will suffer its fate, if she does not change her ways. Moreover, it suggests that King Arthur himself is doomed to destruction because of his pride, employing that favourite mediaeval metaphor, the Wheel of Fortune. Gawaine realises that if Gaynore’s sin is enough to send her to Hell, the sins of Arthur’s knights are far worse. The ghost predicts that although Arthur and his knights have been victorious in France, defeating Gian in battle, Arthur himself will fall at the battle of Camlann on the River Tamar. She says that Gawaine will be in Tuscany at the time, but will rush to Arthur’s aid when he hears the news, and will also be killed. The heraldic symbols on the usurping knight’s shield reveal him to be Mordred, currently still a boy in King Arthur’s court. The ghost disappears, leaving Gawaine and Guinevere alone together, but King Arthur’s knights take courage, because the darkness has gone, and lead Guinevere to Rondallsete, where dinner is prepared. King Arthur and his knights sit down to dinner, but it is interrupted by a woman, richly arrayed, leading a mounted knight. The knight identifies himself as Sir Galeron, defrauded of land by King Arthur – land which has, ironically, been given to Gawaine – and lays down his challenge. Arthur accepts it, but Gawaine marches into the hall, ready to champion his king, but not without doing Galeron the courtesy of a night’s hospitality first. Whilst Galeron rests in preparation for the next day’s jousting, King Arthur calls his lords together, and against his king’s better judgement, Gawaine volunteers to fight Galeron. The two knights are led to the lists the next day, while Gaynore looks on, weeping. They spur their horses, and clash. Now, Gawaine’s horse is killed, and when Galeron gallantly offers him one of his own, Gawaine is offended. They fight on foot, and both knights receive blows which threaten their lives, until, in a sudden reversal of fortune, Gawaine has Galeron in his grip, and is ready to choke him to death. It is left to Galeron’s lady, and to Gaynore, to plead for his life.

And Gawaine the good is garbed in bright green
With griffins of gold engraved on his shield,
Knitted and knotted, with chevrons between.
On a sauntering steed, he swerves to one side;
The other knight spits, eyes slitted and mean,
Cries, “Why do you feint? Are you sly or afraid?”
And swats with his sword: a gash red and clean
In the shoulder of Gawaine; blood soaks through the braid.
The clashing and clamour make fearful ado
The sword, a bright bane,
Splits his mail-coat in twain
To the white collar bone,
His shield cleaved in two.

It carves through the cantel, gouges into the knight,
Through his shield and shoulder a hilt’s depth or more,
And his unscathed assailant laughs from a height,
And Gawaine is angry, grieving full sore:
“I’ll reward you this rout, and repay you aright!”
Then he gallops at Galeron, hard as he dare,
Rips into his blazon, through mail burnished bright,
His shimmering sword shearing through like a spear,
So Galeron’s steed shudders with fright:
Eyes rolling white, with tottering gait.
The knight faces his fate
And with stirrups stretched straight
Canters back to the fight.

With stirrups stretched straight, fiercely he strikes,
Flails at Sir Gawain as if he were straw.
His lady aloft, shrilly she shrieks
When she sees all the blood and how freely it flows,
But the lords and the ladies all clamour alike,
And thank God for Gawaine, knight without flaws.
With a swipe of his sword, Galeron strikes:
Smites Gawaine’s steed – it founders and falls,
And Gawaine, he grieves, he calls on the Rood,
For his slain steed he weeps –
From his stirrups he leaps
And a vengeance he reaps
For Gresell the good.

“Gresell is gone,” cries Gawaine, “By God!
The handsomest horse to ever eat hay.
By him who in Bedlam was born for our good,
I’ll vanquish this knight, and avenge you this day.”
“I’ll give you my Fresian steed,” Galeron said,
“It will never blench or be slain in the fray.”
“Be done with your Fresian – I wish it were dead !”
Gawaine stood still in a doleful display,
“I mourn for no manticore – my stallion of war!”
And he stood by his steed
So stalwart in need,
And his eyes seemed to bleed
With weeping so sore.

With woe and with weeping, he turns to the knight,
Rounds on his rival whose wounds are so red –
Who draws back in dread at the desperate sight
Of Gawaine undaunted, who so wants him dead:
“Thus we’ll drive out the day, and bring on black night
And the sunset shall stain where knight and horse bled!”
In the midst of the joust, Galeron alights,
Brandishing his blade like a demon of dread,
And they bound to do battle, their brands flashing bright,
Till shields hang in shreds
And chainmail runs red,
And the lords shrink with dread
To watch such a fight.

And fighting on foot upon the fair field
As fresh as two lions, fierce for the kill:
It’s wondrous to watch the pair of them wield
Their weapons – and Gawaine does not flag in will,
But shoves his sharp sword under Galeron’s shield,
Into his waist, wounding him well:
No stuffing to stop it: armour caves in to steel,
But Galeron stands like a stone – as men stare –
Takes a lunge at Gawaine
Between visor and chain,
And if he’s not slain
It’s by less than a hair.

And hefting and hacking on helms, they are hewing,
Their beryls all bashed in, on borders so bright,
Each clash of the sword, the precious stones strewing
Till the field glints and gleams in the midst of the fight,
The shields on their shoulders are shabby – and shredding
Their tabards – not one rivet stands straight.
Then lords rue the day that this bargain was brewing,
That set knight on knight and would never abate,
And Arthur feels mangled in soul and in brain:
Both Sir Lot and Sir Lake
Little meaning can make –
Gaynore weeps for the sake
Of gallant Gawaine.

And weeping, Dame Gaynore, her eyes wet and grey
Is aggrieved at Sir Gawaine’s grisly gashes,
When grim-faced Gawaine, like a hawk at its prey,
Sweeps in with his sword, plunges and slashes.
Down the side of Sir Galeron he carves, as through clay,
And rips through the mails as if they are rushes:
He strikes him a blow fit to fillet and flay,
Leaves him grovelling on ground, and blood flows in flushes,
And grovelling on ground he groans on the green –
And yet, wounded he rose
And on Gawain he closed,
Lunging straight at his nose
With his sword quick and keen,

And cruel and keen, his sword carves through air,
Backhanded and brutal, he lethally strikes,
His sword weighted with woe for Gawaine, I fear,
But he gets his come-uppance – and this part I like!
Just when he thinks to slay, then and there,
His sword slips and slants, and on the mail slides,
And Gawaine rebounds, and grabs hold like a bear,
And chokes him. His lady – how shrilly she shrieks,
And screams at Dame Gaynore, plaintive with pain,
“Lady – great is your might –
Have mercy! My knight
Is in such a sore plight!
He won’t bother you again!”

And wilfully Gaynore goes up to her King,
Snatches off her crown and cowers at his feet,
Crying aloud, “You are rich, royal, and strong,
But I am your wife, and your will’s not complete
If not wound up with mine. To kill him is wrong!
Equal their wounds – look how freely they bleed,
Their shoulders in shreds, their shields unstrung!
The groans of Sir Gawaine are a grisly creed –
Gut-wrenching groans that grieve me full sore!
For your wife bends her knee:
Gracious Lord, humour me –
Get your knights to agree
To bring an end to this war!”

Anonymous northern Middle English romance (15th century), paraphrased by Giles Watson. For several stanzas, the poem seems to have reverted to something more akin to the traditional Romance genre, dwelling on the martial prowess of Gawaine and Galeron, but tellingly, the perspective shifts once more to that of the women who watch the joust, and who have very different views on the violence.

The picture shows a misericord from Lincoln Cathedral.