Many companies are now outsourcing their marketing efforts to cloud-based Customer Relationship Management (CRM) providers. But when accounts at those CRM providers get hacked or phished, the results can be damaging for both the client’s brand and their customers. Here’s a look at a recent CRM-based phishing campaign that targeted customers of Fortune 500 construction equipment vendor United Rentals.

Stamford, Ct.-based United Rentals [NYSE:URI] is the world’s largest equipment rental company, with some 18,000 employees and earnings of approximately $ 4 billion in 2018. On August 21, multiple United Rental customers reported receiving invoice emails with booby-trapped links that led to a malware download for anyone who clicked.

While phony invoices are a common malware lure, this particular campaign sent users to a page on United Rentals’ own Web site (unitedrentals.com). 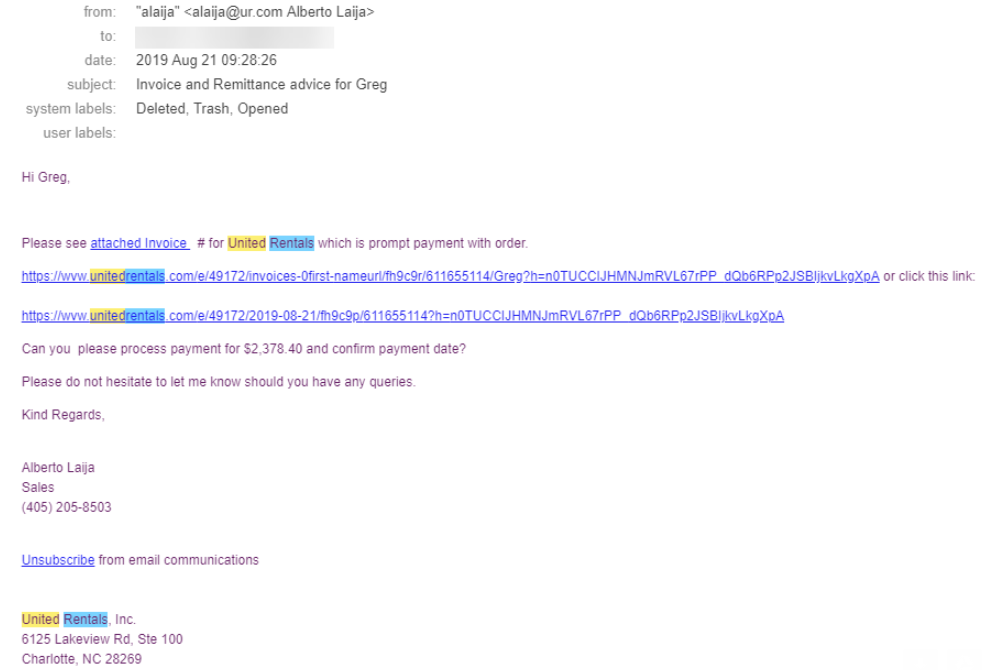 A screen shot of the malicious email that spoofed United Rentals.

In a notice to customers, the company said the unauthorized messages were not sent by United Rentals. One source who had at least two employees fall for the scheme forwarded KrebsOnSecurity a response from UR’s privacy division, which blamed the incident on a third-party advertising partner.

“Based on current knowledge, we believe that an unauthorized party gained access to a vendor platform United Rentals uses in connection with designing and executing email campaigns,” the response read.

United Rentals told KrebsOnSecurity that its investigation so far reveals no compromise of its internal systems.

“At this point, we believe this to be an email phishing incident in which an unauthorized third party used a third-party system to generate an email campaign to deliver what we believe to be a banking trojan,” said Dan Higgins, UR’s chief information officer.

United Rentals would not name the third party marketing firm thought to be involved, but passive DNS lookups on the UR subdomain referenced in the phishing email (used by UL for marketing since 2014 and visible in the screenshot above as “wVw.unitedrentals.com”) points to Pardot, an email marketing division of cloud CRM giant Salesforce.

Companies that use cloud-based CRMs sometimes will dedicate a domain or subdomain they own specifically for use by their CRM provider, allowing the CRM to send emails that appear to come directly from the client’s own domains. However, in such setups the content that gets promoted through the client’s domain is actually hosted on the cloud CRM provider’s systems.

Salesforce told KrebsOnSecurity that this was not a compromise of Pardot, but of a Pardot customer account that was not using multi-factor authentication.

This attack comes on the heels of another targeted phishing campaign leveraging Pardot that was documented earlier this month by Netskope, a cloud security firm. Netskope’s Ashwin Vamshi said users of cloud CRM platforms have a high level of trust in the software because they view the data and associated links as internal, even though they are hosted in the cloud.

“A large number of enterprises provide their vendors and partners access to their CRM for uploading documents such as invoices, purchase orders, etc. (and often these happen as automated workflows),” Vamshi wrote. “The enterprise has no control over the vendor or partner device and, more importantly, over the files being uploaded from them. In many cases, vendor- or partner-uploaded files carry with them a high level of implicit trust.”

Cybercriminals increasingly are targeting cloud CRM providers because compromised accounts on these systems can be leveraged to conduct extremely targeted and convincing phishing attacks. According to the most recent stats (PDF) from the Anti-Phishing Working Group, software-as-a-service providers (including CRM and Webmail providers) were the most-targeted industry sector in the first quarter of 2019, accounting for 36 percent of all phishing attacks.