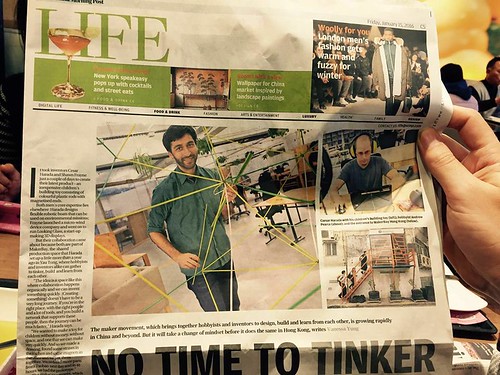 Their collaboration came about because both are part of MakerBay, the shared production space Harada set up a little more than a year ago in Yau Tong, where hobbyists and inventors alike can gather to tinker, build, invent – and learn from each other.

“The idea is a space like this where collaboration happens organically and we can invent something quickly. [Creating something] doesn’t have to be a very long journey. If you’re in the right place, with the right people and a lot of tools, and you build a network that supports these people, then the journey can be much faster,” Harada says.

Being a maker changes the perception of the world. You don’t feel limited. You feel that the world can be changedCESAR HARADA
“We wanted to make a toy for children without money, without space, and one that we can make very quickly. And so we made a drawing, found some straws in the kitchen and some magnets in the office and we put them together. We ordered more parts from Taobao next day and in 48 hours we had the prototype.”

The maker movement, which former Wired magazine editor Chris Anderson described as “the web generation creating physical things rather than just pixels on screens”, is a nascent one in Hong Kong.

Dim Sum Labs in Sheung Wan, the first hacker space in the city, has been joined only by MakerHive, a small co-working space in Kennedy Town, and Harada’s MakerBay, which occupies a 6,500 sq ft space in an industrial building and provides tools from screwdrivers and soldering irons to laser cutters and 3D printers.

But they bring together diverse talents. MakerBay has attracted hobbyists such as Andrew Pearce, a frequent traveller using his stay in Hong Kong to create his dream surfboard, as well as companies such as Frayne’s Looking Glass.

Originally based in Kwun Tong, the company moved to MakerBay shortly after it opened.

Alvin Lee Shiu-pong, an engineer at Looking Glass, says he and his colleagues find the co-working platform a great place for developing new products.

“We can meet a lot of like-minded people and share our ideas. The workshop is really convenient. Having our own tool lab would require a big investment; it’s much cheaper if we can share the tools.”

Lee says the “volumetric” displays they specialise in would be useful for the medical world and beyond.

“Instead of dissecting bodies or looking at 2D images from books, students can use a volumetric display to learn about human bodies,” he says, gesturing towards a transparent brick inked with a detailed 3D display of the structures inside a skull.

“All we need is to process the 3D information we’ve obtained [to form the display] and assign colours according to the different densities identified – a higher density would indicate bone and lower ones can be blood, flesh or tendon,” he explains.

The same process could be applied to learn about the structures of insects or even micro-organisms, adds Lee, whose team is refining the next big thing from Looking Glass – a cube which can display LED sequences based on code that a user has written.

British ecologistPearce shares his enthusiasm for the hacker space. Tired of paying hefty airline charges to ship his surfboards and of buying boards that don’t meet his preferences, he decided to make his own. He has been making good use of the tools at MakerBay and picking up skills at its workshops to experiment with different materials and methods of making surfboards.

“It’s just a nice way of learning things,” says Pearce. “It’s the first time I tried to make something. Here, I’ve figured out how to make designs in 3D and make them with the laser cutter. I’ve done an induction workshop on woodworking, too. And if I managed somehow to get this new technique of building down then I guess it can be a saleable idea.

“I do have a mini Simmons [surfboard] but I can’t take it with me because of all the charges for the airline. You’ve got this limit on the MTR as well, which is even smaller – you can’t even take something as high as yourself. That’s why I have to design something that slots together, which is difficult.”

Pearce might have picked up a few ideas at the Maker Faire Hong Kong in November, when veteran model maker Chung King-yang showed a foldable canoe made from plastic foam and epoxy resin.

The two-day event, which drew entries from more than 300 individual makers and schools, was organised by Dr Choy Sze-tsan.

An assistant professor in the school of design at Polytechnic University, Choy previously sponsored a mini event run by the Hong Kong Makers’ Club. But after three years, he decided it was time to turn the faire into a bigger event and involve more schools.

Harada presented his building toy at the event and the positive feedback has encouraged him to put it on the market soon. As might be expected, Dim Sum Labs was also present and ran soldering workshops.

Hong Kong traditionally is more service- and finance-oriented. People here are less about making things. They’re more about transactionsJASON HSU
Visitors got the chance to test-drive underwater robots made by German Swiss International School, get their hands on different maker items and, more importantly, be inspired.

While conventional fairs tend to be places to sell things, Maker Faires are all about nurturing creativity and sharing of knowledge, Choy says.

At its heart, design covers the broader intention to identify problems and come up with solutions to improve our world, which has a lot to do with the maker culture, he adds; it’s not simply about enhancing aesthetics.

So although some people may consider items featured at the show to be useless stuff, the ideas may be the genesis of something far bigger.

“A successful invention comes not overnight, but after tonnes of experimentations. At the Maker Faire, people can see so many different possibilities of solving problems creatively, it’s impossible for them not to get inspired,” Choy says.

“The maker culture is a great catalyst for people to reconnect back to our physical world and learn through failures and trial and error. Through making and the uncertainties that arise from the process, we venture into the unknown. And if there’re glitches, it’s OK because they keep us trying even harder.”

Harada agrees: “Everyone in their heart has the desire to do something exciting with their life and if you only work on a computer, there’re some limitations. But once you start to make something, you can build an object or change the environment.

“Being a maker changes the perception of the world. You don’t feel limited. You feel that the world can be changed and that’s true for everything from objects to buildings to politics.”

“MakerBar is more than just a co-working space. It has evolved to become a global platform,” says Hsu, who was in Hong Kong last month to speak at a symposium organised by the Hong Kong Federation of Design Associations.

“Most people think about makers as a business model. That’s wrong. The maker culture is not just about [using] 3D printing or laser cutters. [Being a] maker is a mindset. It’s a way to solve problems creatively.

“What you see as the maker movement today is what internet or software was back in the early ’80s when Steve Jobs first launched the Macintosh personal computers. In the future, because of de-monetisation and democratisation of technology, the cost for technology would be almost free and you need to use your service to make money, not with the machine.

However, compared to the mushrooming maker spaces in Taiwan and Shenzhen, the movement in Hong Kong clearly has a long way to go.

This lag is because “Hong Kong traditionally is more service- and finance-oriented. People here are less about making things. They’re more about transactions,” Hsu says.

The perception of making as a non-profit activity is certainly a factor in Hongkongers’ lack of involvement, Choy concedes. “But in fact, besides cultural and intellectual elements, there can be economic value,” he says. “Take Japan’s Maywa Denki, for instance. Their quirky musical inventions which they perform popular shows with are their source of income.”

MakerBay’s Harada says another reason why the maker culture has been so slow to develop in the city is because “the mentality of Hong Kong has been educated too much towards competition and not towards collaboration”.

“They have been trying more to take advantage of each other instead of helping each other. This has to change,” he says.

“In Silicon Valley this culture of maker space, sharing and excellent innovation has been around for 15 years and this is why Silicon Valley is Silicon Valley. People young and old have to open their minds, be willing to experiment and share the resources instead of keeping things to themselves.”