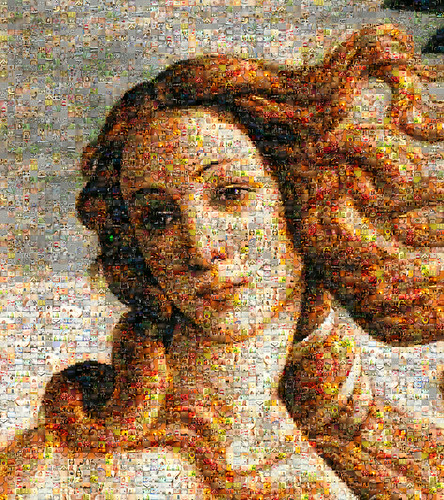 Image by krazydad / jbum
Mosaic made from about 3300 candidate Flickr images containing one of the tags love, heart, kiss, hug or venus.

Target Image: Detail from Botticelli "The Birth of Venus"

I wrote my photomosaic software in Perl, making use of ImageMagick, and the Flickr API. I describe some techniques for making photomosaics such as these, in the book Flickr Hacks, from O’Reilly.

This is the third version of this mosaic that I have posted on Flickr. The previous one was made a year ago, a little after Valentine’s day, hence the title. This one is not actually belated, so perhaps I should say elated valentine ?

This version shows some of the improvements in my mosaic-making software over the course of the year. The obvious visual improvement from the prior version is mainly due to the use of duplicate tiles. The previous versions use all unique tiles, which greatly decreases fidelity to the target image. The tradeoff is that there are far fewer individual tiles making up the image, which reduces the fun of examining it up close.

If you like this image, check out my other mosaics and my posters.