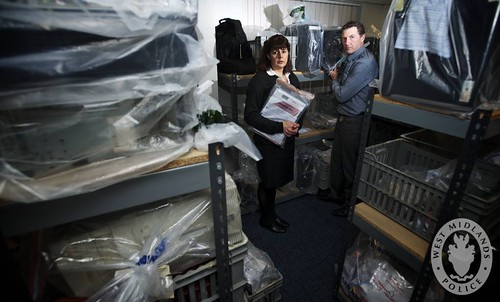 Last year the unit – which uses advanced IT techniques to track internet activity and gather ‘e-forensics’ evidence against suspects – made around 60 arrests in the West Midlands.

Targets are monitored online to build up a picture of their offending; many are found to be exchanging indecent images of youngsters on file-sharing sites or sinister forums hidden in the web’s murky depths.

And such is the painstaking research and expertise of this proactive unit, 95 per cent of all the people arrested in the last 12 months – often during dawn raids – were ultimately charged with child abuse offences.

“They will hijack existing, innocent websites and secrete images and chat facilities in hidden areas that people are highly unlikely to stumble across – then they’ll share the complex URL link with other paedophiles. We uncovered a recent example of this where a West Midlands sports club website was hacked into.

“And when sending email links to indecent images offenders will route them via servers dotted around the world in an attempt to blur the identity of both sender and recipient.

“Offenders are sometimes very tech savvy – but we have IT experts within the team who are capable of following their online tracks and exposing their activity. We’re making notable arrests on a daily basis and as a result helping prevent youngsters from becoming victims.”

The team features both investigators and intelligence officers…the latter being ‘e-forensics’ experts who proactively interrogate suspicious internet activity and hunt down paedophiles.

DI Wallace, added: “In traditional policing, forensics is all about fingerprints and DNA which help us pin-point offenders – e-forensics is the online equivalent. Offenders leave traces of their presence as they surf the net; our intelligence experts can pick up these electronic clues and lead us to the perpetrators.

“These trails see our investigations go around the world and just recently we’ve been in touch with counterparts in Canada and Iceland because emails linking to indecent images have gone via servers based there.

“The web has broken down barriers for paedophiles as they can now associate with likeminded individuals anywhere in the world at the click of a mouse. But it’s also helped us as their web footprints usually point us in the direction of other offenders and even to dismantling paedophile rings.”

West Midlands Police’s COST team is acknowledged as being one of the UK’s foremost specialist teams: many of the techniques developed to track offenders have been adopted by other forces and they recently picked up an FBI award!

And the investigative arm of the unit has also scored some impressive results in recent years.

DI Wallace added: “Part of our work involves analysing indecent images to see if they contain clues about the offender. In one case we managed to link part of a road-sign visible on a photo to a Welsh village, where a suspect was discovered, and in another an image was enhanced to reveal a code on a bottle of beer.

“That was linked to a brewery in the US, locations where it was distributed and the subsequent tracking of a child abuse suspect.”

Online grooming of youngsters via chat rooms and webcams is an area COST team officers are encountering more and more.

And DI Wallace urged parents to play an intrusive role in their children’s online activity to make sure they don’t come to any harm whilst surfing the net.

She added: “You need to be absolutely certain who you’re talking to online – your son or daughter may believe they’re chatting with another teenager but, in reality, it could be someone much older with sinister intentions.

“Parents shouldn’t feel awkward asking their children what they’re up to online and who they’re conversing with on social media. Perhaps have an agreement that they only use the internet in an overt manner, in the living room, rather than squirreled away in their bedrooms.

“And ask whether your child really needs a webcam in their bedroom? If a child is persuaded to expose themselves in front of a camera then they’ve lost control of that image or video and it could be floating around online forever.”

The national Child Exploitation & Online Protection (CEOP) team has developed a website – Think You Know – which provides useful web safety advice and a guide on how to report worries or concerns about people you’re chatting to online.