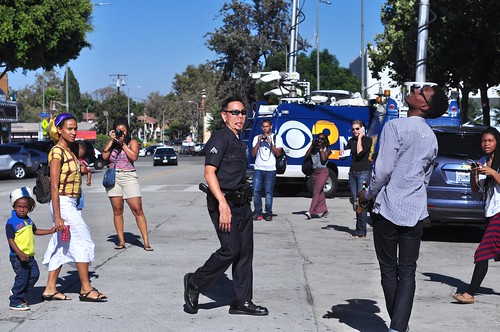 Image by KROCKY MESHKIN
This Image was captured during a protesting of the death of Michael Brown in Leimert Park, CA

11:53AM It was a bot that broke me from the dream world today. The stoic hum produced by my Iphone 5c vibrating on my second hand (sidewalk find) plywood made-to-look-like solid wood Ikea table brought me to consciousness. The number (305) 602-0781 appeared on the liquid-crystal display. Below it: Miami, FL. I don’t know anyone in Miami Florida. Still, being that I work in the entertainment industry and I often get out of state calls regarding work I choose to press my warm human finger into the smooth capacitive circuitry and swipe right.

Foolishly I said hello a couple times because no one was responding, but there was a hint of someone on the other line. I thought perhaps poor signal. Then, her voice, “Hello how are you doing?”

I was half-way sure it was a bot, yet I responded, wanting to play along. Me, “Great.”

Then, it, “Blah, blah, blah, I want to tell you about historically low insurance rates.”

I know this all happened at 10:35AM because my phone logged it.

Now that I was awake I walked to the bathroom and released my night-time liquid build up of toxins, I didn’t flush because I knew there’d be a solid release on the way. I downed some water and ate my daily organic orange, this time purchased from the Palmdale Trader Joe’s (I went through there on a spontaneous trip to Death Valley Tuesday.) Today is Thursday, BTW.

After my morning shit I stepped to my self-built stand-up desktop computer to check the internet for any communications.

Like magic I scrolled through Facebook to find people had commented and like photographs of my image. I scrolled through the FB news feed to find other things people had posted. A friend put up a video of this street personality, Matthew Silver. I choose to watch this video, and you should know, that know in the year 2014 you have so many friends posting videos that you truly have to make a conscious choice of what content you’re going to give your time to throughout the day.

I was quite pleased I pressed play on this one. Matthew Silver, also known as, Man in White Dress was running into stores and beating on a drum chanting, “Love is the answer, stop buying stuff.” He’s promptly removed from a grocery store by security. Next he storms into Forever 21, this is all happening in NYC yet I’m watching from my bedroom in Studio City, CA. So he’s running around the Forever 21, and he’s dancing and people look scared. And it’s weird that people are afraid of this behavior. It’s weird for me to see security trying to stop this man from dancing, epically since Forever 21 is blasting POP-hits. The video made me happy and ignited a fire within me making me want to get out and spread more love today.

I took a break from the computer world to cook my daily oats. I like to make rolled oats, also from Trader Joe’s. I boil them on the stove-top and then I add fresh fruits, today I added an organic banana.

While I let my oats cool, which can take ten to twenty minutes, I came across posts about some incident that happened in Ferguson, Missouri. It quickly came to my knowledge that an unarmed 18 year old boy had been shot to death by local police. The first post I read was very interesting. A friend had posted an article about how the hacker group anonymous had shut down the Ferguson, Missouri government by taking out their computer systems.

The first shock about that was that you can shut-down a city government just by taking out computers. The second shock was the reason they say they did this. They say that they want the city of Ferguson to release the name of the officer that killed this teenager. And that’s huge. Basically it seems that when these things happen, and yes it does often happen that U.S. police officers mistakenly kill innocent people. It seems to me that the police try to hide as much as they can to protect any single officer involved. Almost like a gang, in the way that gang members all dress alike and cut their hair the same way. (I personally was the victim of a hate crime and was never able to achieve justice because the gang members all look the same and there was no way to charge any-one person. But that’s a whole other story.) What’s important is what’s going on right now.

I don’t have Television and I try to avoid the news because I feel it’s important to give your time and energy to the immediate people in your life. However this thing happening today is huge. I’ve never heard of a hacker group shutting down a government.

From what I gathered in reading articles on the web, is that the people of Ferguson, Missouri then protested and police asked them to only hold protests during the day, but they protested into the night, and police started attacking the crowds.

Is it really our current state of culture that we have “rules” for protests? Because I thought protest means you’re going all out until the voice of the people is heard. Apparently the Ferguson police department feels a need to shut down their citizens. It’s going around that they now supply these police departments with military-type weaponry and it becomes a thing where the officers want so bad to use these tools of murder that they will mentally escalate situations.

From what I read it seems pretty clear cut, a police officer murdered an unarmed teen, and this officer should be facing the consequences of that action. That’s common sense.