Achievement unlocked: played Tetris on the side of a skyscraper — the Green Building at MIT (photo) 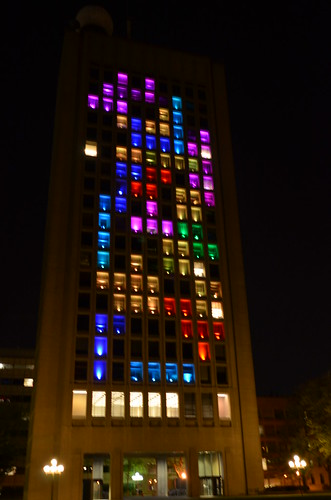 Image by Chris Devers
I wasn’t involved in this, but when I read about it, I drove over to see for myself.

On the southwest(ish) corner of McDermott Court, close to Building 14 / Hayden Memorial Library, they had a black console set up where anyone that walked up could take a turn playing it. The console was about the size of a washing machine or large podium, with the four standard Tetris ← ↑ ↓ → directional buttons, and that was about it.

The game was very responsive. Aside from the fact that the “screen” was almost 300′ tall, the gameplay wasn’t all that different from playing it on an ordinary computer, video game console, smartphone, Game Boy, etc. The main problem was the pixel glitches — some windows were left on, and others weren’t lighting up, so you couldn’t always tell what shape the tiles were until they had moved a couple of levels.

Notably, the console was on a concrete plaza, and there were no wires connected to it. So it had wireless access to the network (not so surprising), and a stable power supply (slightly more surprising). Chances are it was probably just a laptop that started out with a fully-charged battery, and ran until the battery expired.

[That, or the console was over a manhole cover, and there was a Mechanical Turk under it controlling everything, but I think we can dismiss that explanation.]

Tetris on the Green Building

The Green Building (Building 54) is home to the MIT Earth and Planetary Sciences department.

MIT hackers have long considered "Tetris on the Green Building" to be the Holy Grail of hacks, as the side of the building is a wonderful grid for the game.

The game started off scrolling the words "TETRIS" and then would start into the first level. As the player progressed, the second level would start with more pale colors, making it harder to identify the type of block. The third level involved the colors shifting on-screen. Upon losing the game, all of the blocks would fall to the bottom of the building.