A Wade Through The COVID-19 Disinformation On The Internet

Right, some folks on the internet wanted a post about the disinformation around the Coronavirus (COVID-19 or SARS-CoV-2) and I had been looking around a bit anyway, so I decided to go a little deeper. First, let me say that there is some straight up crazy out there that is being propagated by the crazies in the world and the grifters, but, there is some real dangerous stuff as well. The gamut of the disinformation that I have seen thus far ranges from nation state to would be snake oil salesman who, a century ago, would be selling their shit off the back of a covered wagon to rubes in small towns. It is only by the fact of modern technology that these people now have a far wider and on the whole, gullible audience to purvey their brands of crazy.

So yeah, the range of things runs from guys making face masks to protect themselves from COVID19 by placing bikini underwear over their heads (as seen above) to outright grifter operations like the pastor and his peeps selling colloidal silver as the cure for Coronavirus. This virus has been a boon to many others than just our pal Mr. Bakker here seen below. A lot more within the religious space have grasped on to other crazy cures like Red Onions and prayer as well. I found a slew of posts on YouTube, Facebook, and Twitter alone to keep one busy for weeks looking into all the claims of a cure. In fact, you all should check out the hashtags of #CoronaCure, #COVID29Cure, and the like. You will see a lot. ONIONS ARE THE CURE! 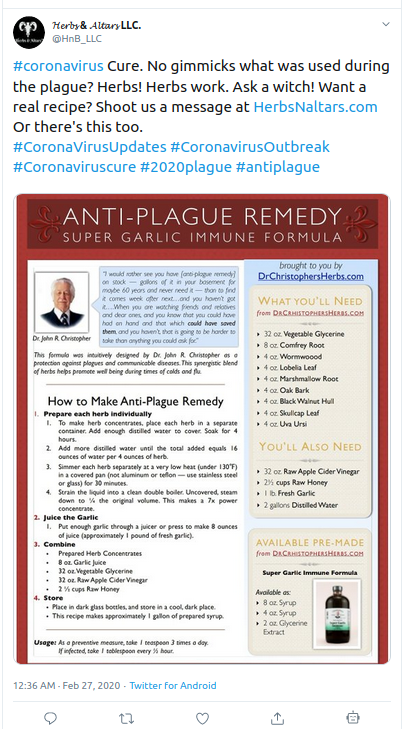 Others still though, are offering prophylaxis for the COVID19 pandemic like this guy selling “Bane” style face masks to stop you from getting infected. This mask could in fact be something that might be helpful, but, the only true mask that will help is the N95 mask that the doctors wear to prevent such transmission from happening not only when they wear them to stop things getting in, but also, and more to the point, for patients to wear so they do not spread the disease as easily through aerosol transmissions like breathing, sputum, and sneezing. It is most likely that this guys Bane mask is not the N95 filtering so yeah, you might look and sound like Bane, but you are more likely to get the COVID19.. While looking all cool and shit.

On the spectrum of political and Nation State sponsored disinformation about the COVID-19 pandemic, we have a range of people and countries with varying reasons for dis-informing the public about the pandemic. I will break these down into groups for you and reasons:

HongKong folks have a few reasons to disinform about this as well as present the real truths that the Chinese government does not want the outside world to know about. In the case of these YouTube videos I found, the disinformation is interspersed with real video coming out of Wuhan province that paints the Chinese leadership in a very poor light in their response to these events. It has come to pass that the Chinese officials have tried to keep a lid on the outbreak from the start, lying and obfuscating about the dire nature of the problem in Wuhan and in Hubei, but, this guy is just going all out with the Xi mask to promote all kinds of theories, including, yes, you guessed it, that the COVID-19 was in fact released from a bioweapons facility in Wuhan province. 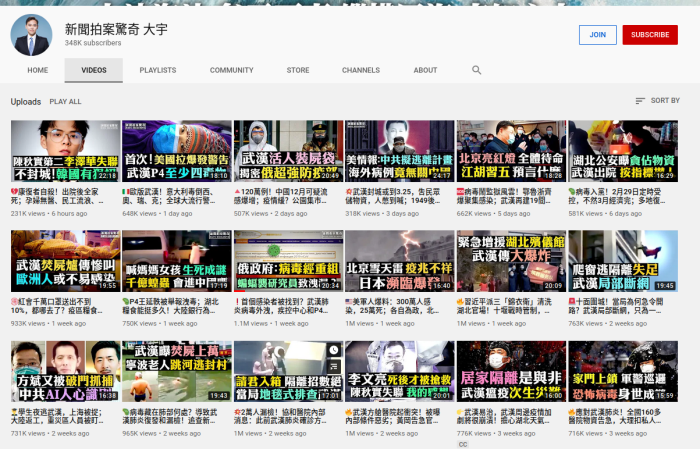 One site that stood out from a Twitter feed tied to disinformation on the outbreak was the G-News site. This site is chock full of the crazy and is put up by a Chinese ex pat who now lives in Emirates because he ran into some legal trouble in China. Miles Guo aka Guo Wengui, is funny to watch. He tries to present himself as an authority and insert himself in images like he is on with Bannon and the link, but in reality he isn’t a name you see on the news that often as far as I can tell. His axe to grind with China here is obviously why he is throwing in with Bannon and others putting out disinformation on the pandemic and about China in general.

Oh Pooty, you love COVID19 long time. It is of course within the interest set for Putin and Russia to hit hard on the COVID19 situation as well. The advantages that they reap in wholesale division and fear on this one must be a priority just under the whole 2020 race as far as I am concerned. Of course, their mission will be to insert narratives into the 2020 election and against the candidates as agitprop to get Trump another four years in office. I am already seeing a setup on this that I will discuss further down the post. As it stands now, the bot activity has been ramping up on the hashtags for #COVID19 as well as #COVID19Bioweapon so keep your eyes peeled for narrative as well.

4) Trump and His Disinformation Forces:

Speaking of Trump and his disinformers… Trumps minions are now spinning up including Bannon and Rush, taking differing approaches to the whole affair. While I have not been able to stomach watching Bannon for more than a couple minutes, you can see he has a whole “war room” setup on YouTube where he has one of our pals Miles Kwok, or Miles Guo, or whatever name he chooses to use on the cast to throw out the disinformation about the pandemic. Guo, as you may remember above, has whole cloth claims on his site that the whole incident is from a leaked bioweapon in Wuhan, so, yeah…

On top of Bannon we have our pal Rush. Yes, Rush motherfucking Medal of Fucking Freedom Limbaugh as of two days ago began selling the idea to the morons that listen to him, that the COVID19 pandemic is in fact a putsch by China leaking a bioweapon against Trump. What’s even more holy what the actual fuck, is that he claims it was by the Democrats.

What is the most fucked up thing is that I know there are fuckwits out there who will now believe this shit.

You didn’t think that those whacky QAnon’s would not add this whole COVID19 thing to their repertoire right? Welp, they have, and I suspect now that Rush has made his stand on that hill of disinfo, the QAnon’s will only ramp up from what I already saw on Twitter and Discord. Their spin of course is that it is a bioweapon as well. They also seem to be going on a bent about a conspiracy with the Jews again… These people need to get lives. One of the more interesting angles though is this whole “dead scientists” thing they have going. They also were making hay about the Chinese scientists who were arrested in Canada was it? Yeah, well, keep an eye out for more crazy over COVID19 out of them too. 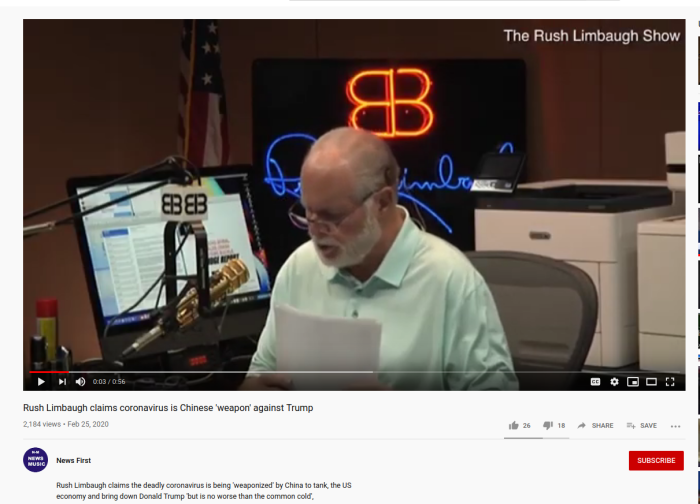 Right, now the whole Twitter thing is crazy as usual, but, there is one account that I wanted to call out on the COVID19 disinformation crazy train. That account primarily is the @howroute account. This alleged comedian, actor, filmmaker, is none of those things. In fact, the only thing that seems to check out is the name Max as being one spelling of his real name, Maksym. Reporters have been following this guy’s disinformation on Twitter for some time now. This account has been putting out blatant disinformation around the pandemic for quite a while now, and though people have called him on it nothing has stopped him. In fact, his follower count has risen since I first became aware of him by the thousands. He went from nothing to nearly 50k followers since he started this whole disinformation campaign. All that is known at present is that Maksym is in America, he was born in Ukraine, attended university there, and then came to the states by information gleaned from the internet. Perhaps there are monetary goals here, maybe there is more, but this guy works in tech and lives in Washington state. 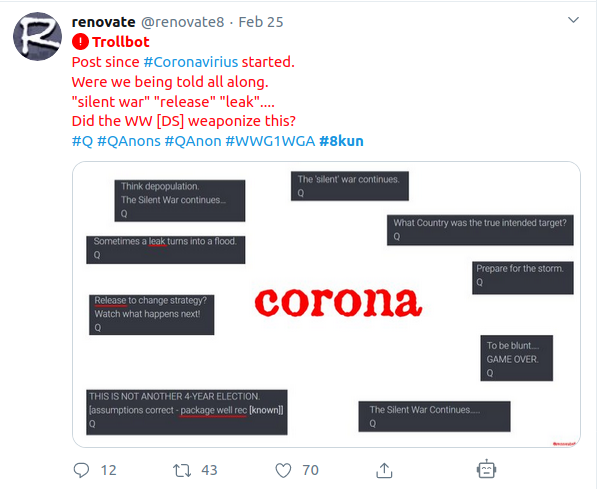 Alex, baby, you are one whackadoo guy looking to make a buck. Alex has as usual, been all over the bioweapon angle of the whole pandemic. Of course now with Rush and his fuckery, the two combined likely will be infecting the Fox news cycle too soon enough. In fact, the advent of Tom Cottonhead getting in on the whole thing shows just how fucked up things portend to be in the near future as things get hot. Cotton went on the news to say that he wanted more proof around the whole bioweapon leak and I am sure, will be bringing this up in the Senate as well.

My one real questions is just how long it will be before Alex gets in on those sweet sweet colloidal silver dollars? 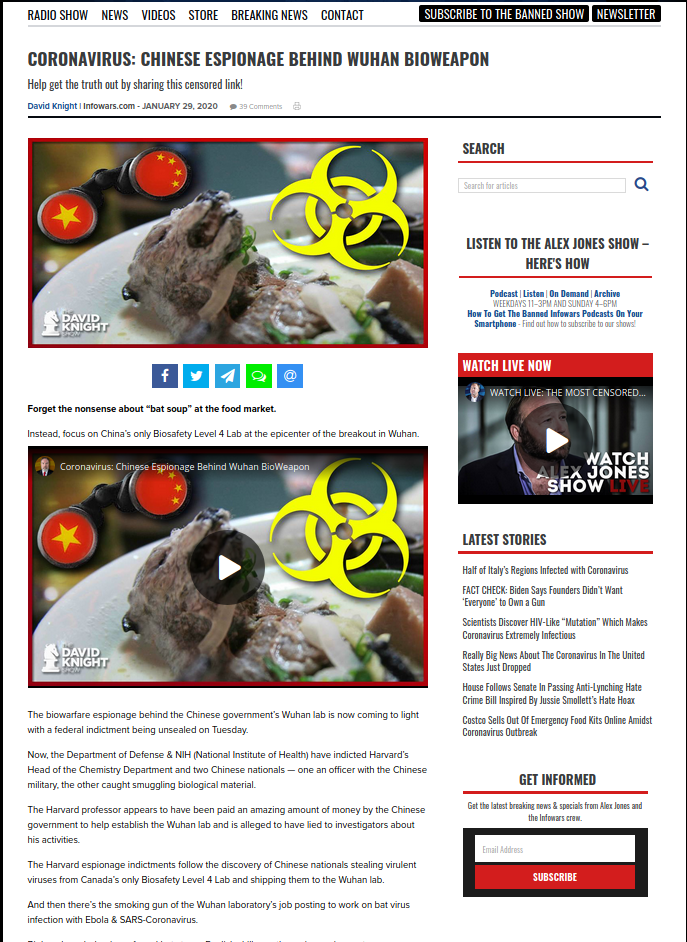 Well, there you have it kids. Make sure you get yourselves into the DECONTAMINATION UNIT as soon as you finish reading this post! I just brought you a smattering of the whole disinformation pie here. You can go look for yourselves if you like. I am going to go take a very long hot shower in lye and resume the whiskey intake as my prophylaxis against COVID19 and COVID19 Disinfo.