Yandex, a European multinational technology firm best known for being the most-used search engine in Russia, has revealed it had a security breach, leading to the compromise of almost 5,000 Yandex email accounts.

The company says it spotted the breach after a routine check by its security team. They found that one of their system administrators with access to customer accounts was allowing third-parties to see some of these accounts “for personal gain”. Yandex made it clear in its official press release that no payment details were compromised.

With so much attention paid to eye-catching external threats like ransomware and BEC, it’s easy to forget that one of the biggest threats organisations face isn’t trying to force its way into their network, it was invited in.

Current and former employees, contractors, business partners, suppliers, third-party vendors, and service providers are all potential insiders. And they don’t have to be technologically savvy to pull off an “inside job”.

In fact, some insiders aren’t even intentionally malicious. The most common cause of incidents is employee negligence, such as the misuse of access privileges or a general inattention to keeping sensitive information private and secure, can cause employers a lot of headaches. This can be further compounded by a lack of effective cybersecurity and privacy training programs or an utter absence of an intentional culture of security.

Negligent and careless employees (or what others call “accidental insider threats”), more often than not, have zero intention to hurt their organizations; malicious employees, on the other hand, knowingly act against their employers for personal gain.

According to the 2020 Cost of Insider Threats: Global Report from the Ponemon Institute, the costliest insider threat is credential theft, which averages to nearly $ 875,000 USD to remediate. Not only that, incidents of credential theft have tripled in the last 5 years. With a booming demand for employees who are willing to share company secrets with criminals, it wouldn’t be a stretch to expect that cases involving this would be popping up more frequently. They pay well after all.

“Employees are always a prime target for adversaries, whether it is targeting them to leverage their machine or identity or recruiting them actively on a closed source forum,” said Brandon Hoffman, chief information security officer at Netenrich, an IT service management company, in an interview with Threatpost. “There has been several cases where we have seen a disgruntled employee posting messages on the dark web aiming to make a contact where they can ‘cash out’ their leverage as an employee.”

Organizational breaches have become a mainstay in news outlets, with many of them about outside parties forcing themselves inside private networks either by force (hacking) or social engineering (phishing). With the current pandemic and everyone working remotely, spotting insider threats has become more challenging than ever. This should make businesses more vigilant and determined in curbing insider threats before it happens. For those who don’t know where to start, here’s a good place: look at the zero trust model, and see how you can adapt it within your organization.

Two former employees of Twitter have been charged with spying on thousands of Twitter user accounts on behalf of the Saudi Arabian government, likely with the purpose of unmasking the identity of dissidents. According to an indictment filed on November 5 and unsealed just yesterday, one of the charged Twitter employees, American citizen Ahmad Abouammo, left the company in May 2015 and the 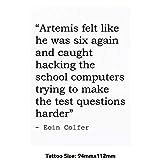 You don’t need to spend a fortune on a permanent and, let’s face it, painful inking, simply apply our temporary tattoos for a quick and pain free transformation; ideal for fancy dress and pool parties, impressing your mates or even as a test drive before committing to the real thing.All of our temporary tattoos are skin safe and non-toxic, water resistant, easy to apply and remove. They last up to 1 week, depending on the area applied to and how often it’s washed.This large temporary tattoo is a

I GOT CAUGHT as a HACKER at PROJECT ZORGO MEETING! Escape Room Buying $10,000 Mystery Box Haul

The HACKERS are on to me!

After Chad Wild Clay made VY IS GONE So We Find Her Phone to Reveal Her Secrets at Hacker PZ9 Obstacle Course Park Challenge, Vy Qwaint created VY QWAINT LEAVES SPY NINJAS SAFE HOUSE! Fails Lie Detector Test Challenge Proving She’s a Hacker! and Daniel uploaded HACKER UNMASKED at Mysterious Obstacle Course Park while Exploring for PZ9 Project Zorgo Face Reveal to the Exposing Project Zorgo YouTube channel, CWC & Regina PZ4 find evidence Vy is trapped in a Project Zorgo headquarters escape room. There is also word of a mystery box game or challenge of some sort. What gadgets are inside after unboxing. Regina tries to rescue Vy after an epic haul run up the stairs to the meeting. Project Zorgo leader challenges the hackers to prove they are not one of the spy ninjas. If they win, they are released from the meeting. After the challenge, they discover spy ninja Vy Qwaint. Regina’s undercover sneaking into a secret meeting to save Vy proves useful because she uses a spy gadget to hack the TV and help Vy Qwaint. Vy then donates ,000 which buys her a mystery box filled with treasure. Thank you for watching my PG entertainment comedy videos in 2019!

Carter Sharer -WINNING MY FRIENDS CAR AND BUYING HIM THE EXACT SAME CAR!!

Collins Key – Best DIY Prank Wins ,000 #2 & How To Do Funny Back To School Prank Wars VS Magic Challenge

Most royalty free background music is from Epidemic Sounds. You can use their music in your videos by clicking here http://share.epidemicsound.com/mNMGH

Hack Attack: How the truth caught up with Rupert Murdoch

Hack Attack: How the truth caught up with Rupert Murdoch