MIT Rogers Hall Dome, with TARDIS on it (night)

MIT Rogers Hall Dome, with TARDIS on it (night) 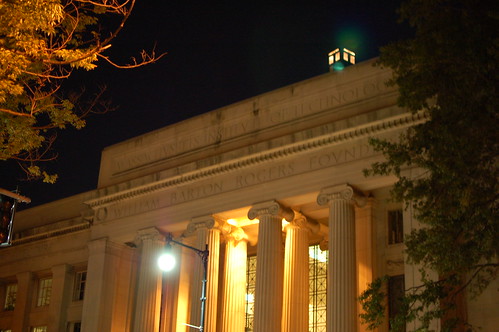 Image by Chris Devers
Pasting from Bostonist: More MITardis: Doctor Who vs. Harvard?:

Earlier today, we posted photographs of the scifi cult object that recently appeared on the roof of MIT building 7. After a closer inspection of the images, we have deciphered the text on the left door:

We’ve also learned, from Eric Schmiedl’s gorgeous nighttime photographs, that the TARDIS lights up at night.

The blue box, when it initially materialized at MIT, seems to have been accompanied by a banner declaring the score:

We know (because we’re nerds) that the Doctor has longstanding feuds with the Master, Sontarans, Cybermen, Daleks, the Rani, and the Ice Warriors, and he owes Casanova a chicken, but—what sort of conflict does he have with Harvard University?

UPDATE: After The Doctor’s visit to MIT, a Dalek showed up, too.