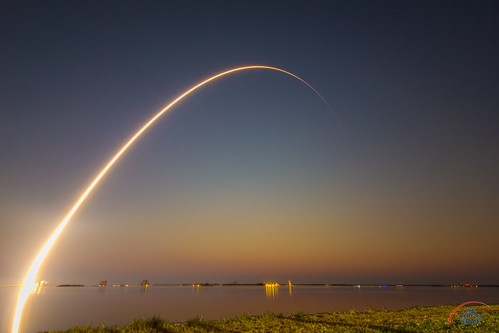 This is a completely hacked shot. It’s a combination of two frames taken off my backup streak camera. The first frame was taken at 5:20pm as the sun was setting. She sky was just brilliant, and the sun was throwing lovely oranges and reds downrange. The second frame is a 163 second exposure of the streak, taken at 6:42pm.

I’m showing it here to show a version of the shot we were hoping for, but as the launch slipped to the end of the window, we ended up shooting a full nighttime launch. I’m still not sure what issues United Launch Alliance needed to work out (and then the range got involved, also adding a few minutes to the delay), but despite missing the twilight, it was still a really lovely launch.

Frames processed in Lightroom and then stacked in Photoshop.