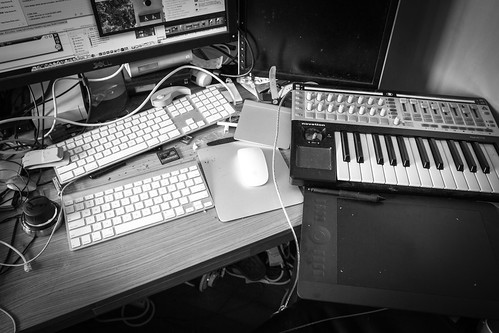 Image by See-ming Lee (SML)
Someone [1] on SML Facebook [2] commented that SML should be careful to not trip from the cables on the desk. While cable management continues to be an issue, the real issue with the current work space is not cable management but work surface availability.

Right now I am using a MUJI dining table [3] fully extended which measures 130cm (4.3 ft) L x 80cm (2.6 ft) D as my working surface. It is barely holding all the input control surfaces which I use. The Wacom is mostly now resting on my arm rest because this is the only way I can do all of my work.

I would rather not have to have all of input surfaces, too, but they all serve a purpose:

+ Apple Wireless Keyboards. I have two (one not shown) because Apple’s bluetooth pairing won’t allow easy machine toggle and I have two Macs running side by side.

+ Apple Wired keyboard. I need this so I can use InDesign keyboard shortcuts for Paragraph and Character styles.

+ Apple Trackpad. Sometimes when I have all these wireless devices running (especially if the Eye-fi is running) the Bluetooth Mouse is very unresponsive and have lags so I use the trackpad.

+ Apple Magic Mouse. I need this because it is the fastest.

+ Wacom Intuous Touch 5 Medium. I used to have the Wireless version but Mac does not pair with it very well, which is very annoying. So I upgraded to the Intuous Touch 5 which supports multi-touch and comes with a wire.

Aside from Photoshop work and sometimes Illustrator work for drawing type, I also use the Wacom for writing Chinese characters. Apple’s native handwriting recognition would only do it with the Trackpad. The Inking app does not support Chinese. So I use VisionObjects’ MyScript Stylus [4] which supports multiple international languages including all the the CJK languages, latin languages as well as Arabic. It is the best handwriting app available on the OSX that I have tried. Recommended.

So you see, what I really need is a larger desk and a larger space. Which for now I cannot really afford because Hong Kong properties are ridiculously high now. And I am in no hurry to go enslave myself under some gigantic agencies any time soon.

Share
Tweet
Pin
0 Shares
chevron_left Three Blind Mice [DVD] [2004] [Region 1] [US Import] [NTSC]
Happiness Hacks From Hounds: What Your Dog Can Teach You About Living Your Best Life Yet chevron_right