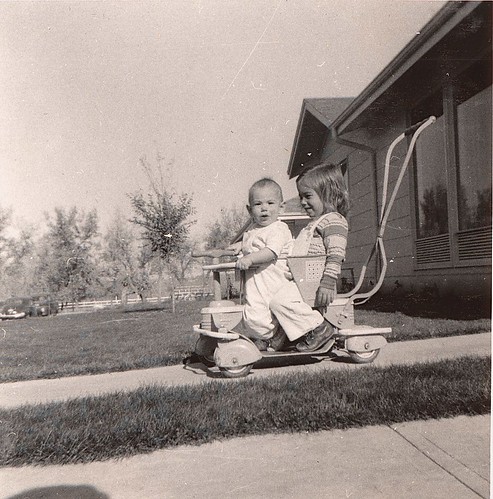 Image by Ed Yourdon
Mom has written on this album page, "This is the way we look when we walk to the store!" — and everything on the page is dated 10/26/1952

Some of the photos in this album are “originals” from the year that my family spent in Denver in 1952-53 — i.e., the period before Omaha, before Riverside, and before Roswell (which you may have seen already in my Flickr archives). I went back nearly 40 years later, as part of some research that I was doing for a novel called Do-Overs, the beginning of which can be found here on my website

and the relevant chapter (concerning Denver) can be found here:

Before I get into the details, let me make a strong request — if you’re looking at these photos, and if you are getting any enjoyment at all of this brief look at some mundane Americana from 60+ years ago: find a similar episode in your own life, and write it down. Gather the pictures, clean them up, and upload them somewhere on the Internet where they can be found. Trust me: there will come a day when the only person on the planet who actually experienced those events is you. Your own memories may be fuzzy and incomplete; but they will be invaluable to your friends and family members, and to many generations of your descendants.

Actually, I should listen to my own advice: unlike my subsequent visits to Roswell, Riverside, and Omaha I did not take any photos when I tracked down my old homes from the 1952-53 period in Denver. I did locate the second house, and I was stunned to see how it had changed over a period of 40 years: as you’ll see in the photos in this album, it was a new house, under construction, when we moved in. The only “trees” were a few scrawny saplings that my Dad planted in the front and back yard. 40 years later, the trees towered above the house … but the house itself seemed tiny, in comparison to what had seemed like an enormous mansion to an 8 year old boy.

While most of our residential occupancies last just a single year, the period in Denver lasted roughly two years. But it felt almost like two separate cities: first we lived in a rented house in the Denver suburb of Aurora; and then we moved into a new house that my parents purchased somewhere on the south side of Denver. So, as usual, I ended up going to two different schools, and developed a fairly superficial set of friendships with two different groups of kids.

So, what do I remember about the two years that I spent in Denver? Not much at the moment, though I’m sure more details will occur to me in the days to come — and I’ll add them to these notes, along with additional photos that I’m tweaking and editing now.

For now, here is a random list of things I remember:

1. While living in our first home, I finished off my second-grade school year. I did reasonably well in school on most subjects — it was a couple years later, in Roswell, that I announced at breakfast that I had mentally calculated the number of seconds in a century, in the hope that it would help me fall asleep. I rattled off the number, and when my Dad repeated the calculations on his slide rule, he shook his head and told me that I had forgotten to account for leap years. Anyway, in Denver, my 2nd-grade teacher told me I had a much more serious educational problem: my penmanship was atrocious. The school authorities insisted that I spend the summer practicing penmanship, and strongly suggested to my parents that the *real* problem was that I was left-handed. Several attempts were made to make me start writing with my right hand — all of which were dismal failures. I eventually gave up on penmanship, and began printing everything … a habit that continued until I was given a hand-me-down manual typewriter by my parents at the age of 12.

2. The summer of 1951 was hot and humid; and like many other families in the area, my mother took me and the older of my two sisters (the other one was born a year later) to a large public swimming pool (it seemed enormous at the time, but it was probably pretty small). Anyway, it was a great breeding place for germs of all kinds; and sometime in the late summer, everyone but my mother came down with polio. We were all taken off to three different hospitals; and the neighbors were so panicked that my mother might be infectious that they stopped speaking to her altogether. Miraculously, all three of us had gotten the least-virulent form of polio, and we all recovered sufficiently within a week or two that we could come home. I was fairly weak for the next couple of weeks, and had to take a hot bath every day; but aside from that, none of us suffered any no permanent effects.

3. It was late 1951 or early 1952 when we moved into the house that my parents had purchased in another part of town; I remember that my younger sister was born there on St. Patrick’s Day. As usual, I was allowed to wander anywhere I wanted, on foot or on bicycle, as long as I came home on time for dinner. One day I took a long section of rope, climbed way up into a tree a mile or two away from home, and then way out on a long sturdy branch. I tied one end of the rope around the branch, and then wrapped another part of the rope twice around my (left) hand. I swung down from the branch, intending to descend in an orderly fashion, just like I had seen firemen doing it in the movies. Unfortunately, it didn’t work: I slid helter-skelter to the ground, landing in a heap, and the rope around my hand cut through the skin, almost through the tendons, and all the way to the bone. I had to have my hand wrapped in bandages for the first month of my 3rd grade school year; and once again the Authorities tried to use the opportunity to get me to use my right hand for penmanship. Once again, they failed.

4. In the summer of 1952, I was sent off to a sleep-away camp for two weeks, somewhere in the mountains of Colorado. I have no idea why, but it was a lot of fun … until I was thrown off a horse and knocked unconscious. The camp authorities decided there was no reason to inform my parents, though my parents were rather curious when I subsequently refused to climb up on a horse wherever we went. They also noticed that I was limping when I came home from camp, which the camp authorities had apparently not noticed; I had hiked all the way to the top of a mountain with my fellow camp-mates, and I had a rock in one of my boots. It caused a blister, which got infected, and I was probably lucky that they didn’t have to amputate my foot. All in all, the camp experienced was deemed a failure, and I was never sent away again.

5. I got my first slingshot in Denver. It was not a “professional” Wham-O slingshot with natural rubber and ash wood; instead, Dad made one for me from a Y-shaped chunk of plywood, and with strips of rubber from an old automobile inner tube. I thought it was the most amazing thing I had ever seen — and immediately began shooting at every bird I could see on a telephone wire or branch of a tree. I never did hit a single one of the. (By the way, Wham-O eventually went on to achieve even more fame with its hula hoop, frisbee, and hack sack. You can read all about them here on the Internet: en.wikipedia.org/wiki/Wham-O )

6. The next best thing, besides a slingshot, was the top of a coffee can. They tended to have fairly sharp edges, but if you held it carefully and threw it just right, it would sail for miles and miles … at least it seemed that way. It wouldn’t return to you, a la boomerangs (which every kid had heard about, but none had ever actually seen) — but it was just like throwing a flying saucer. Unfortunately, coffee-can-tops were not readily found, especially since we kids never drank any coffee. We had to wait patiently for our parents to finish off an entire can of coffee, and then scoop it out of the garbage can when it was thrown out.